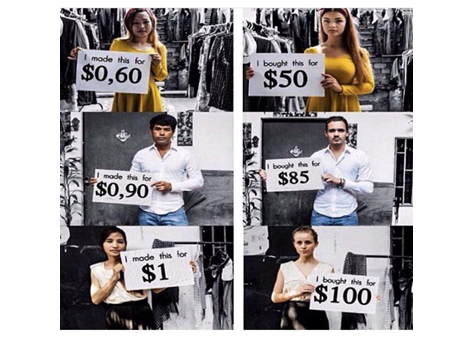 Brief- This article explores the two pronged impacts of the fast fashion industry on garment workers and the severe implications on the environment.
Clothing and fashion are inevitably a part of everyone’s life, it could be due to the human pursuit of fitting in by following the trends or just buying clothes out of the need of covering oneself. More than often, most of the clothes we purchase are affordable yet trendy and are bought from the huge market of fast fashion; cheap trendy clothes that are out of style just as quickly as they are in style are described as fast fashion. The Fashion industry is recorded to be a $1.2 trillion global manufacturing industry[1] and is the second-largest polluter in the world, followed by the oil industry. One might wonder, how did fast fashion manage to become successful and take over all our closets within a period of a few years?

While it is often believed that fast fashion is the response to the increased demand of the consumer, it is the retailer’s choice of staying afloat or sinking among its global competitors. When the retailers chose to put profits over people and the environment, the quality of the garments began decreasing which in turn led to the increased demand for clothing. The mission of maximizing profits began with making our clothes out of date constantly, making us constantly wanting to keep shopping for something just a bit new and trendier. By doing this, the retailers maximize their profits by replacing garments rather than replenishing them. To meet the increased demand for something new, fast fashion brands are always on a lookout for new designs- a hunt that often leads to stealing work created by independent artists and small creators. At the same time, we have reduced ourselves from people to consumers with an unquenchable thirst for more even when there is no need for more.

Increased demand and constant inflow of new ideas also means increased employment opportunities, but when it comes to fast fashion, an employment opportunity is far from a satisfactory sigh of relief for women and children in developing countries. Cheap garments are sourced from cheap labour in the sweatshops of India, Cambodia, Bangladesh, Indonesia, and other economically backward countries. The sweatshop workers work under poor working conditions for inhumanely low wages for long hours. A study conducted in Bangladesh recorded that the workers earn below the living wage of $60 per month for 14 to 16 hours a day in hazardous working conditions. The hazardous environment in these garment factories has led to the deaths of over 400 workers since 1990. An infamous example is the 2013 Rana Plaza Accident in Bangladesh resulted in the the death of over 1,200 workers[2]. Other than working with harmful carcinogenic chemicals, these workers are prohibited from forming trade unions, which takes away the freedom of the workers from defending their rights. Further, these factories are the hotspots for human exploitation. With 80 to 95% of the workers being female, gender-based violence has been a major issue of concern. Other than being the victims of sexual harassment, female workers are subjected to inhumane physical and mental disciplinary measures, and are fired if they get pregnant[3]. Child and slave labour has been a notorious component of this industry[4]. Children as young as 13 years old are employed in these factories for less than 30 pennies a day. The terrible situation of these workers should be one of the factors forcing us to reconsider the prevailing hypocrisy in the fashion industry before purchasing a t-shirt with the words “Feminist” printed on it[5].

In addition to gross exploitation of human beings, fast fashion comes at a massive environmental cost, with 20% of industrial water pollution coming from textile treatment and dying, 1.5 trillion litres of water being consumed by the fashion industry every year and 200 tons of freshwater being used to dye a ton of fabric, while 750 million people in the world have no access to drinking water[6]. In addition to excessive water pollution, the fashion industry releases an unprecedented amount of effluents from the dyes, releasing micro plastic fibres into the oceans and landfills[7], contributing to soil degradation, and directly contributing to 10% of the global carbon emissions[8].

The lack of strict unambiguous regulations and legislation contributes to the global exploitation of people and the planet in the plain sight. Fashion expression can still be achieved by honouring the artisans, looking beyond greenwashed narratives of brands, respecting culture and heritage, advocating for policy changes, the involvement of the governments, and transparency and accountability across the supply chain.

As Orsola de Castro, the founder of the Fashion Revolution says, “Demand quality, not only in the products you buy, but in the lives of the people who made it.”. Fashion is more than just a trend, it is about giving people a voice and a chance of expression without fear.