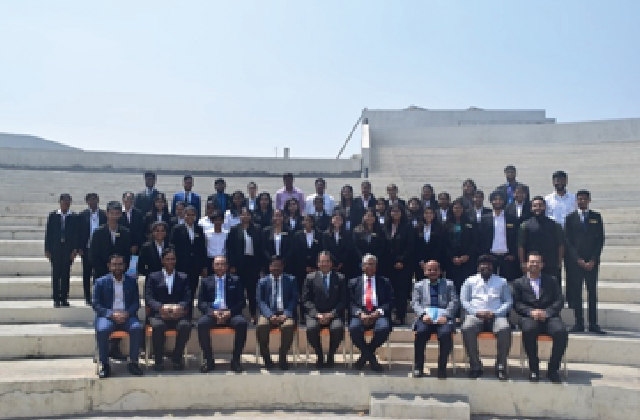 Centre for Criminology and Criminal Justice

As a part of outside classroom learning, the Centre for Criminology and Criminal Justice organized a Research Internship with Tribal Research Centre, Government of Tamil Nadu, Nilgiri Hills, with an object to study the Customary Law and Correctional practices of Nilgiri tribes from 19th June 2018 to 30th June 2018. The team of twenty students from SLS Hyderabad, along with faculty members, Dr. Rengasamy Stalin, Assistant Professor and Mrs. Pooja Rhine, Assistant Professor headed to the Queen of Hills on the 18th of June. The journey kick-started with a visit to the Tribal Research Centre where the students briefly studied about the six native Tribal groups of the Nilgiri Hills. The students were divided into teams to focus on the subthemes of research: Civil customary law, Criminal customary law, Human Resources and History, and collected data through door to door surveys and through community gatherings. The team travelled to about six locations over a period of six days visiting the Todas, Kotas, Irulas, Kurumbas, Panniyas and Katunayakas at their innate locations gaining an inimitable experience by discovering their rich, flush and fertile culture. The students then, spent the next four days in compiling the material collected and further researched on the subject, at the Tribal Research Museum that had a remarkable collection of books. At the end of the ten days, the team returned to campus with a manuscript that was soon to be published.

Continuing its tradition, the Centre announced their 2nd National Training Program on Criminology and Forensic Science, after achieving success in their first edition. The program entertained invitations from universities across various parts of India, with the crowd being a healthy mix of forensic students, aspirant doctorates, law students and criminal advocates. The syllabus for the program was divided into 4 parts- Fingerprint Examination, Forensic Anthropology, Crime Scene Investigation and Questioned Document Examination, each to be dealt by a different resource person who has specialized in these respective fields. Questioned Document Examination was taken by Mr. Peter Kiran and the purpose of the subject was to help the participants in developing a basic understanding of how to differentiate forged handwriting, signature, and counterfeited currency notes from the original. Fingerprint Examination was taken by Mr. Mebin Wilson who primarily taught the course through various practical exercises and assessments. Crime Scene investigation was taken by Mr. Don Caeiro and it is one of the most important subjects for a law student to understand the technicalities of criminology and the application of forensic science in uncovering evidences. Forensic anthropology was taken by Mr. Vichar Mishra and the subject deals with the basic physical aspects of the human body, their characteristics, developments and changes which takes place continuously not only in a lifetime but also even after the death of a person. The basic idea of this course was to help the participants in developing a basic understanding of how it helps to solve legal issues in which the humans, their dead bodies, their skeleton, bones or their fragments are involved.

The first Plenary session on day one which commenced after lunch, had five presenters namely, Dr. Girjesh Shukla, (Associate Professor and Dean Acamedics at Himachal Pradesh national Law University, Shimla); Mr.Riju Raj Jamwal (Advocate, Supreme Court of India); Mr.Faisal Faish, (Assistant Professor, Maharashtra National Law University, Nagpur); Dr.Rengasamy Stalin, (Assistant Professor, Maharashtra National University, Nagpur); Mr. Chirag Balyan, (Assistant Professor, Maharashtra National University, Mumbai).  The esteemed dignitaries presented their papers and enlightened the students and the participants on various themes like Mob and Riot Culture, Cyber Crime and Terrorism and Drugs Trafficking. With the end of the plenary session, began the First technical session of the event. There were twelve presentations with a total of twenty-two participants presenting on the themes of Role of Media in Crime prevention; Prevention of Rioting, Mob Lynching and Mass Atrocities; Prevention of Crimes of the New Millennium: Cyber Crime and Cyber Terrorism; prevention of Drugs and arms Trafficking. The session lasted for a period of two hours, each team presenting for an average of eight minutes, which was followed by a question answer session by the panel and the participants of the seminar.

Looking towards the future, the centre hopes to grow stronger in enriching its database of resource materials in the field of Criminology and Criminal Justice and provide more value to the students of the campus. For the academic year 2020-21, the Centre will be conducting the successive editions of its flagship events along with various workshops on Criminal Law. Some of the events planned for the next year include a Workshop on emerging technologies that will impact the criminal justice system and a Workshop on the Juvenile Justice Act.