THE LEGITIMACY OF CAPITAL PUNISHMENT: THE SHABNAM ALI CASE

The judicial system of India is on the verge of marking a landmark decision of granting capital punishment to a female which is a first in Independent India. This decision has set out its own set of controversies. Gender disparity pervades all facets of social life, and capital trials worsen pre-existing gender inequality. At the same time, it has emerged that gender-based bias in capital cases is a complicated problem, as there is always more than one type of prejudice at work, and these prejudices may work both for and against female capital defendants. The propensity of players in the judicial system to see females as victims and survivors rather than offenders of crime is at the core of these inconsistencies.[i]

This study aims at providing an overview of this landmark judgment. The Supreme Court bench led by the Chief Justice of India observed on January 23, 2020, while hearing the review petition filed by the Amroha death penalty convicts, that “the courts punish the crime not the person.” Shabnam and Salim, the defendants in the Amroha murder case[ii], were found guilty of murdering seven members of Shabnam’s family in 2008. An infant girl was strangled as part of this. The death penalty was imposed on the pair by the Sessions Court in July 2010, and the verdict was upheld by the High Court of Allahabad in 2013. The death penalty was also affirmed by the Supreme Court on May 15, 2015. Death sentences were given to the convicts in less than six days. The warrants were later declared invalid by the Supreme Court on May 27, 2015, because the convicts had not exhausted all possible remedies. The decision was significant because it established rules for the granting of death warrants. The review decision in this case is still pending.

The Amroha case takes on added relevance in light of the uproar caused by the delays in the execution of the four Nirbhaya death penalty convicts. The petitioners’ counsel requested the Supreme Court to consider the “good conduct of the two convicts” for revocation in the Amroha case. The defense stated that the current convicts good behavior should be considered a “mitigating circumstance” because they have shown the potential of reform. Even as the verdict in the Nirbhaya case is awaited, the government has petitioned the Supreme Court for a reduction in the time limit for last legal remedies.

The Supreme Court stated that the right to life guaranteed by the Indian Constitution[iii] also extends to death row inmates. The order issued by the Trial Courts was rushed through without delaying for the convicted murderers to exhaust their legal options. The Supreme Court in this case drew reference from the case of Mohd. Arif v. Supreme Court of India[iv], in which the court held that every review petition lodged by death row convicts for a review of their capital punishment must be heard by a three-judge bench in open court. The Supreme Court’s decision is the exception to the basic guideline that review petition must be resolved by circulating in the judge’s chambers. Furthermore, according to Order VI, Rule 3 of the Supreme Court Rules, 2013, proceedings in which a death sentence has been affirmed by the High Courts and an appeal has been filed in the supreme court must be heard by a jury of at least three justices. The Court went on to list five key elements that must be met in a death penalty case:

It is inherent for the study to also note a few past judgements that have shed light into this subject matter. Firstly, addressing the case of Shinde-Gavit[v] case, in which a mother, her two siblings, and a son-in-law were all charged. In 1997, the woman died in custody, and charges alleged against Kiran Shinde were withdrawn after he was demoted to approver. Eventually, the sisters were found guilty of kidnapping 13 children and killing nine of them, and were sentenced to death. Only five homicides could be proven in court, which is significant. Although this is a sensational case, there is still a lack of information about the defendants. What is obvious is that the women were poor, which may have been a motivating factor in their criminal behavior.

Secondly, drawing reference to the varied implications of such crucial judgements to not only the law but also society. One such example would be the undue delay throughout the sentencing of four death row convicts in the Nirbhaya rape charge due to multiple applications by the prisoners. The Shatrughan Chouhan verdict of 2014 guiding to the formulations of rules that have left capital cases clean, thus resulting to a denial of justice. It has also contributed to the propagation of guidelines that have left capital punishment cases firmly shut, thus leading to as a result, it is critical to ensure that the victims do not suffer as a result of the provision of remedies to the convicts, and that justice is not forgotten.

The anti-abolitionist and abnormal narratives miss and erase the fact that the relationships between gender and crime are intensely social. It is difficult to distinguish the offender from the crime, as well as the social factors that affect criminal intent and execution. Instead of considering crimes as “exceptional” acts, it is vital to recognize that they are intertwined into general societal fabric, with gender playing a significant role. Considering the inequitable gender relations go on in the line of honour, it’s time to consider reformative justice rather than retributive retribution. If Shabnam can educate her fellow prisoners to read and write tomorrow, and Salim can pass the time in prison reading books, there is reason to think that the death penalty is not their desired outcome. If we accept that the ultimate objective of retribution is reform and redemption, we must reconsider how this can be accomplished through a well-thought-out systematic approach. The death penalty takes away the opportunity for perpetrators to make amends.

Punishing criminals is necessary, but it must be done in accordance with the fundamental principles of natural justice. The Supreme Court’s observation that at least three judicially educated minds should be used to decide the finality of the death penalty points to the gravity that must be considered when making such decisions. Furthermore, the court’s decision to hold the review petition hearing in open court ensures that the capital punishment hearings are transparent and equitable. The Session Court’s hasty order to carry out the capital punishment is an instance of retaliatory philosophy rather than a theory of justice. It not only ignores justice, but that also hints at the court’s nebulous hope that the convict will not pursue the constitutional legal remedies to him. It is critical to note that such bureaucratic inconsistencies, which seem to be minor flaws, set a dangerous precedent for disregarding the constitution and bill of rights prohibition on unreasonable and unjust executions. What matters is that persons have access to the rights that are secured to them through the law of the country.

Disclaimer : Any views presented in this blog are the personal opinions of the author and does not represent the opinion of the institution. 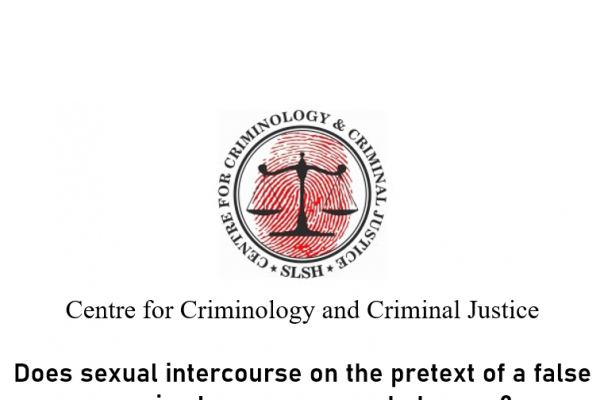 Does Sexual Intercourse on the Pretext of a False Promise to Marry Amount to Rape?
No comments