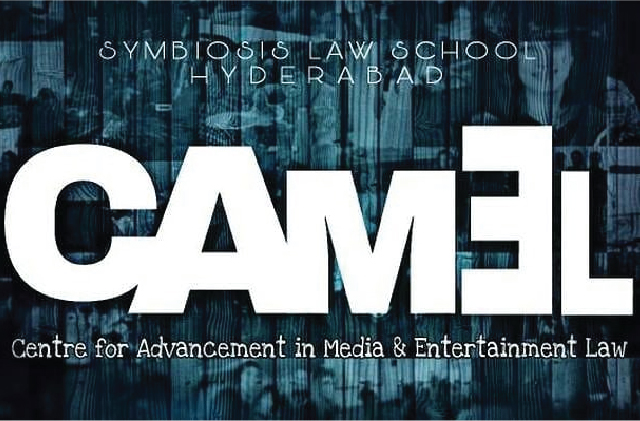 Centre for Advancement in Media and Entertainment Law

The Centre for Advancement in Media and Entertainment Law (CAMEL) is an in-house centre at Symbiosis Law School, Hyderabad focusing on establishing and creating a platform and atmosphere which provides cutting edge research, knowledge and awareness in the field of Media & Entertainment Laws which would boon the benefit of the students and the stakeholders of the field.

The media and entertainment industry has been in the limelight for decades now. Not to mention it has become an indispensible part of our lives. The industry not only allows us to be projected with the issues prevailing in the society but also allows us to have a take on them. Thus it has become the need of the hour for the upcoming legal professionals to acknowledge the nitigrities in the functioning of the world of Media and Entertainment.

The Centre for Advancement in Media and Entertainment Law is the result of coming of life of an visionary idea that was the brain child of Mr Siddhant Jhamb, the founding member, as well as Ms. Bhavna Menon and Mr Sagar Subramanian, the co-founding members. These students aimed to incorporate the Media and Entertainment Laws into the curriculum through various academic, co- curricular and extra- curricular activities. This Centre is also forever indebted to the guidance and tutelage of our then Officiating Director, Dr Sukhwinder Singh Dari, who believed that we would be successful in instilling these new and developing laws in the minds of the younger generation who could be the torch-bearers of tomorrow. With this firm belief, team CAMEL inducted such like-minded 12 members across all 5 batches, who had the same knack and passion which was required for the growth and development of this Centre.

The very first event which was conducted by CAMEL was a workshop conducted in collaboration with the Training and Placement Centre of the College. This workshop was on the various Facets of Media and Entertainment Laws, which was conducted by Ms. Persis Hoodiwala and Mr Persie Jagaonwala. Ms Persis Hoodiwala is the Legal Head for Reliance Entertainments and is an enthusiast in these laws. She has numerous big blockbusters to her credit. We were extremely glad to have her here and establish with her ties which is going to last us a lifetime.

The second, independent and flagship event which was organised by the entire team of  CAMEL in the month of January 2019, was Censure des Medias, a French word meaning Media Censorship, chosen for the competition since there shall be arguments from both the Central Board for Film Certification (CBFC), famously known as the Censor Board and the various Production Houses. This event aimed at not only providing for a theoretical and pragmatic learning about the functioning of the Media and Entertainment Industry but also aimed at the holistic learning of skills which should be mastered by the counsels in this particular stream and also for imparting knowledge of hardcore commercial negotiations and the arguments that take place in the industry. The event was well received by all the participants and judges.

The third event, the Intra College Round Table Discussion conducted in August 2019, focussed on improving the ability of one individual to raise points on various controversial issues prevailing in the field relating to freedom of speech and expression, Intellectual property, censorship, etc. This event saw the participation of some insightful speakers and all of them brought in various new line of thought which interesting at the same time motivating for everyone who had witnessed the rounds.

The centre also conducted a capsule course for the students which was taken by Ms Persis Hoodiwala herself in the month of October, 2019. The aim of the course was to help students in understanding the basics of Media and Entertainment laws along with the importance and involvement of the Intellectual Property Rights in the Entertainment Industry. This event was mainly targeted towards the 1st and 2nd year students as it was vital for the new comers to be introduced to these laws to ensure that the lineage of the Media and Entertainment Laws can be continued.

Similarly, the centre for its future events, shall focus on helping students more by giving them a platform to which they can share their ideas and opinions on various topics related to the field which shall beneficial in improving their skills and simultaneously bring experts from all over the country who will be able to guide them in pursuing a career in this field.

Last but not the least we would extend our thanks and express our gratitude to our current faculty in-charge, Mr R. Radhakrishan. He has been a great source of inspiration for all of us. His level of enthusiasm is very infectious and is always a constant source of encouragement and guidance for us.