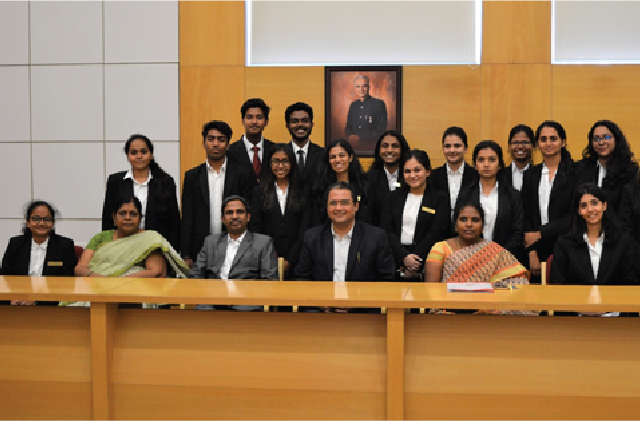 The Centre strives to impart socio-legal services to the needy and under privileged people of the society. It is crucial to expose law students to the concrete and realistic aspects of the legal field as a study of law is a professional course. The Legal Aid Centre aspires towards accomplishing this purpose and alongside establishes a platform to serve the poor and needy.

The Legal Aid Centre of Symbiosis Law School, Hyderabad entered into a Memorandum of Understanding (MoU) with the Women Safety Wing, Telangana State Police on 13th March, 2020 at Women Safety Wing, Hyderabad. The major thrust of the MoU is to create awareness and help women and children across the State by organising various Legal Awareness campus and Training Programmes to bring behavioural and attitudinal changes, identifying gender stereotypes. Through this collaboration, Legal Literacy Clubs (LLC’s) will be established across educational institutions in the State to engage youth and children.

The Legal Aid Centre of Symbiosis Law School, Hyderabad in collaboration with the District Legal Services Authority, Ranga Reddy District organized a Legal Awareness Programme on the occasion of National Girl Child Day in Verlapalli Government School. The main aim of this awareness programme is to increase the legal literacy among the young girls about their rights and safety.

The members of Legal Aid Centre have taught the students of 6th to 10th standard, Fundamentals of the Constitution under this initiative in 18 classes over a period of three months. Study material for the classes was also distributed to all the students. The centre aims to implement this initiative in all schools in Telangana.

The Legal Aid Centre in association with the District Legal Services Authority of Ranga Reddy District organized a Legal awareness camp on NALSA (Protection and enforcement of Tribal Right Scheme, 2015) on 27th September, 2019 at Gram panchayat office, Kundelkunta village. The main objective of this camp was to enlighten the tribal community about the benefits of education, their rights and entitlements under various government schemes.

A Medical Camp was also conducted in association with the Jeeyar Integrative Medical Services Hospital, Hyderabad (JIMS) to provide medical assistance and free medicines. A general health check-up was conducted and all the villagers were provided with dengue prevention medication. The breeding spots were also identified in the village.

Further, a preliminary survey was being conducted in Kundelkunta village, Faroognagar Mandal which constituted of 1200 Banjara Tribesmen distributed in five tandas. The survey helped the member interact with the villagers and gain an insight into their lives by identifying their lack of facilities. Based on the same a camp was conducted.

Avagahana’19- Panel Discussion on “Internet Culture and its Predicament” Workshop on “Cybercrime Awareness- technicalities and Prevention” – 13th and 14th September, 2019

The Legal Aid Centre conducts Avagahana as a vital component of its work to make the people aware of certain significant issues and bringing it to their conscience hence making them vigilant about the same. As a part of Avagahana’ 19, the centre also  conducted a Panel Discussion on the topic “Internet Culture and its Predicament” and Workshop on Cyber Crime Awareness in association with Cyber Crime Department, Hyderabad City Police to spread awareness on digital safety.

The Centre aimed to spread awareness on the themes of internet culture and its predicaments and Cybercrime Awareness – Technicalities and Prevention through the event of Avagahana. The members conducted a panel discussion and a workshop on the theme and a and consisted of eminent personalities dealing with cybercrime in various aspects. The panel discussion helped the students and the members gain knowledge on the internet culture, it predicaments and the safety measures to be taken while the workshop emphasised the reality of the situation and the correct steps to be taken for prevention and guidance.

The panel included, Mr. Mahesh Muralidhar Bhagwat, IPS, Commissioner of Police, Rachakonda Commissionerate. Mr. Dileep Konatham, who is currently working as the Director for Digital Media at Information Technology, Electronics & Communications Department, Government of Telangana, Mr. Anil Rachamalla, the founder of the End Now Foundation, India’s first Non-profit Organization advocating on Digital safety and Dr. Baijesh Ramesh, an Internet Addiction Therapist and a Neuropsychologist with an experience of 8 years. The Panel Discussion will be moderated by Dr. Shanta Thoutam, Vice president of Corporate Innovation and Business Development at T-Hub. Following the panel discussion, a workshop on Cyber Crime Awareness – “Technicalities & Prevention was organized by the Cyber Crime Department, Hyderabad City Police. The workshop was intended to train the attendees on technicalities & preventive measures to combat cyber-crime, social engineering crimes, smartphone or internet – addiction, cyber-bullying, online surveillance and online hoax news and other digital abuse through various groups of people.

The members of the Legal Aid Centre conducted a services camp in Keesara in collaboration with District Legal Services Authority and the Telangana State Legal Services Authority. The camp concentrated on effective implementation of poverty alleviation schemes as per the NALSA module. Through the camp the members as paralegal volunteers gained an insight and first- hand experience of what problems the villagers and the backward community are facing and how they can be solved and the measures taken by the government through implementation of various schemes in accordance with the NALSA module.

The members of the Legal Aid Centre conducted a legal awareness program for the new batch (2019-2024) of Symbiosis Law School. The awareness program made the new batch aware of the provisions they have in college regarding ragging and the safeguards provided to them under UGC guidelines and IPC. The awareness session helped the members spread the message against ragging while collaborating with the District Legal Services Authority of the Ranga Reddy District whose theme of the month July is Anti-Ragging.

Taking into regard the number of helper staff who work in the Symbiosis campus, the Legal Aid Centre of Symbiosis Law School, Hyderabad undertook a campaign with the male workers on Day 1 and female workers on Day 2 to talk about certain issues like alcohol addiction, menstrual health respectively and essential services including education and health. There was an overwhelming response as the workers came forward to share their grievances to which the members of the cell actively planned to take steps on the same.

The Legal Aid Centre aimed to provide education and awareness to students in surrounding schools and colleges on various issues. We conducted a career guidance workshop for students from classes 6th to 10th. The members were able to reach out to the students in the government school and enlighten them about the career opportunities.

Awareness session to the housekeeping staff to prevent Swine Flu.

The Legal Aid Centre conducted an awareness session to the housekeeping staff of Symbiosis regarding the preventive measures to be taken for swine flu, which also included taking suggestions of the staff in improving the sanitary measures adopted in the campus in order to curb swine flu. Through the camp we were also informed and educated along with the staff and interacted with them.

The members of the Legal Aid Centre took part in the Paralegal Volunteers Training Program. The Para Legal Volunteers Scheme was introduced by NALSA in the year of 2009. The program helped the students learn about how to engage in legal aid clinics and get an idea about the practical implementation of various aspects of law and ways to bridge the gap between people who do not have access to justice and District Legal Services Authority.

As part of Women’s day celebrations, the members of the Legal Aid Centre went to the Mamidipalli Government School along with the facilitator from 1000 Smiles Foundation. Through this event, the centre members were able to inspire the young girls as they are the face of new India now.

The members of the centre as well as the Sarpanch and Ms. Shravya Reddy (Founder We &amp; She Foundation) addressed the issues and spoke on the same. The villagers actively participated in the same by sharing their experiences and opinions regarding the topics that were discussed in the drive and any problems which they have faced.

The members of the Legal Aid Centre visited the Cherlapally Central Jail to create legal awareness to the prisoners about their rights and to provide them with any legal aid required. A session on Plea Bargaining was also conducted for the Under Trial prisoners. The purpose of the visit was to expand the knowledge of the students in practical aspects of prison related issues that would have been otherwise completely neglected. We hoped to give an insight to the prisoners on their rights. The aim was to provide them with any kind of legal aid that was needed and could be provided. Through this visit the members were able to understand that the jail and the members inside are not as brutal as one would think of and some of them truly do need help in terms of legal aid, as many of them come from poor backgrounds where sometimes their families do not support them and in other cases they are not financially sound enough to have a lawyer for themselves.