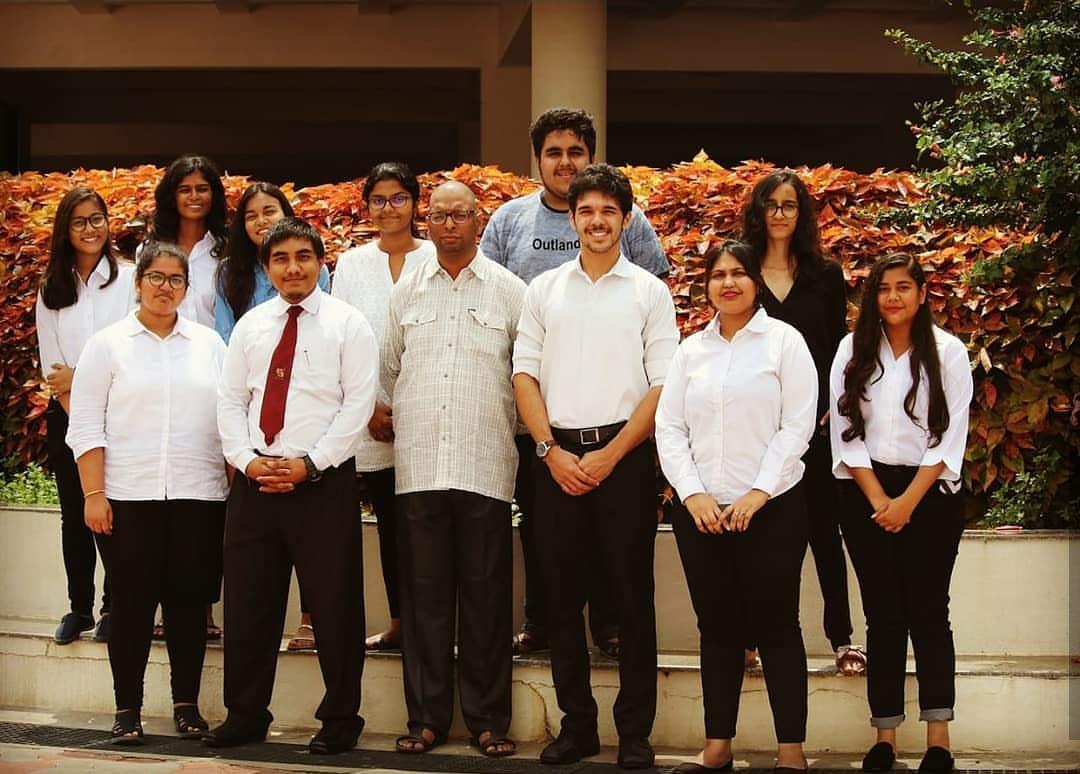 Centre for Immigration and Citizenship Law

The Centre for Immigration and Citizenship law, Symbiosis Law School, Hyderabad was opened on 3rd January, 2019 by Dr. D. Ganesh Kumar (Faculty-In-Charge of the Centre) and Ms. Anushka Misra (President-Student Founder of the Centre). The primary objective of the centre is to provide guidance to interested students who have interest in the field of immigration law and to nurture their interest into fruitful career and social help for the needy immigrants/migrants. The centre has future goals of building connections among immigration scholars and service professionals in the region, raise awareness of the resources available for immigrant populations, and the specific problems encountered by service professionals, facilitate opportunities for collaborations aimed at improving immigration-related services in the region. The Centre takes initiative to organize Boot Camps, Seminars and workshops for advancing and nurturing students all over India interested in the subject. Currently, we have organized several workshops, guest lecturer and debate competition.

On 23rd February, 2019, the centre conducted its first workshop on “Precepts and Practices in Immigration Law” The first speaker was Dr.(Prof.) Rathin Bandopadhay, Head of Department of Law and Management, North Bengal University, West Bengal. He brought with him his vast array of experience on International law and Citizenship law. He went about explaining the intricate aspects of citizenship law comparing the situations in India with that of Mynmar, United States and Australia, Canada and U.K. Dr. Rathin Bandopadhay kept himself constricted to the theoretical part of the topic in hand so that the second speaker could delve in the practical aspects. The second speaker for the day was Advocate Avik Ghatak. Advocate Ghatak made a deep insight into the practical applications of the citizenship law in India. He discussed the difference between the terms nationality and citizenship which were often used interchangeably. Further, he came up with practical problems existing in India relating to the Citizenship and immigration law and discussed the provisions of the Citizenship law innovatively highlighting how the Jammu and Kashmir problem could also have benefits from a unified citizenship law. He also highlighted changes brought under the Indian Citizenship (Amendment) Acts. This event was a great introduction to the aspect of immigration and citizenship issues in college and imminent support and participation was received from the students.

On 3rd October, 2019, the centre had organized its first Intra Debate competition and the response Intra College was really path breaking. The event turned out to be a huge success with an in-depth debate on the different aspects of immigration law covered in the topics the debate was regarding the current CAA issues persistent in the country. For a change the judges invited were only a few year students and were notable speakers and young avid Munners who had won awards such as high commendation, special mentions and verbal mentions in their MUN career which had spanned across their school and college lives.

As a first National event the Centre for Specialization in Immigration and Citizenship Law has planned a one day Seminar on ‘Immigration and Crimmigration- Issues and Challenges’. The Centre is making an endeavour to explore new arenas and dimensions of this newly emerged field. Many notable personalities from the sphere of Immigration law will attend the Seminar to share their views, experiences and expertise on the topics. Through this Seminar the centre endeavour to generate an interest in immigration law, the present issues which plague the field of immigration and how law plays a role in the same. The main objective of this Seminar is to have a pertinent enlightenment on the themes and sub-themes of this emerging arena through the contribution of legal luminaries, delegates and participants from academia and persons from the legal field.

There are many noticeable issues that the centre pledges to work for with the help of collaboration and assistance from United Nations High Commissioner for Refugees and the Human Resource Law Network. Few of the areas that the centre want to research and focus in the future are as follows:

The problem of ‘acculturation gap’ between the immigrant children and their families has been a significant contributor to family disputes. This arises because of the ease with which immigrant children adapt to the new culture in the country that they move to, compared to their parents’ generation, who still hold their native language and culture to be primary even if they have resided outside the native country for a long time.

With immigration reform on centre stage, employers face increased scrutiny of their hiring practices in an area traditionally overlooked or not carefully monitored by human resources officials or employment law practitioners: immigration-related employment discrimination. Employers can’t ignore their obligations to ensure that workers are authorized to work in respective country. Employees must provide employers with documents that show (1) identity and (2) employment eligibility.

The above two terms are often mistaken for each other and it is important to understand the difference between the two. Nationality refers to the place of birth of origin of the person. Citizenship refers to the process by which one is registered as a citizen by the government of a particular country.

Domicile refers to the place in which one person lives with an intent to stay, and on the other hand citizenship refers to a legal status which entitles one person to many rights and privileges available to a citizen.

The Citizenship (Amendment) Act, 2019 was passed in the Parliament of India in December 2019, and its object is for the inclusion of migrants from three main countries – Bangladesh, Pakistan and Afghanistan by making them eligible for Indian citizenship. However, in order to acquire such citizenship status, the migrants must be Hindus, Sikhs, Buddhists, Jains, Parsis or Christians. The act explicitly provides for the exclusion of Muslims from receiving the concession.

In Indian law, this is the first act to use religion as an eligibility criterion for reaping its benefit, which makes it violative of Article 14 of the Indian Constitution. The reasoning behind this exclusion is that it is believed that Muslims are unlikely to face religious persecution from the countries that are primarily Islamic, but however, this is quite unreasonable since Hazaras and Ahmadi Muslims are minorities who do face persecution.

This act neutralises the provisions relating to jailing and deportation of illegal migrants, provided they belong to the listed religious groups from the listed countries. This means that this act elevates the status of these people to legal migrants, even if they entered the country without any valid documents or grant of permission.

The OCI grants a foreign citizen with Indian origin an immigration status to live and/or work in India. However, this does not amount to actual citizenship under Indian law, and has various limitations. Whoever is a citizen and has a passport of another country, except that of Bangladesh and Pakistan can apply for OCI.

Some of the common frauds and abuses under immigration law include using a falsified passport, faking a marriage or a relationship, enrolling in fake universities/organisations to obtain visa permit, committing fraud with financial means, use of fake documents, etc.

In India, the prominent immigration laws are The Passport (Entry in India) Act, 1920, The Foreigners Act, 1946, and The Registration of Foreigners Act, 1939. Any activity done in contravention to the provisions of these acts have specific penalties which includes imprisonment or fine.

Non-residential Indians, or NRIs, refer to people who are Indian by descent, birth or origin, but reside outside India.

It refers to when a person is legally recognised as a citizen of more than one country. The Constitution of India usually does not permit a citizen to hold dual citizenship, however, there are some extraordinary situations in which it may be allowed.

Extradition refers to the process by which one country, upon the request of another, effects the return of a person who has been convicted or accused of a crime committed in the former country’s jurisdiction.

Extradition of offenders and fugitives – political, military and religious offenders

Crimmigration is a term that has been recently coined and is an emerging area under immigration law. It simply refers the body of law in immigration law that deals with criminal offenses its effect on someone’s immigration status. It is a combination of immigration and criminal law.

Refugees are people who cannot return to their country of origin because of a well-founded fear of persecution, conflict, violence, or other circumstances that have seriously disturbed public order, and who, as a result, require international protection.

An asylum seeker is someone who is also seeking international protection from dangers in his or her home country, but whose claim for refugee status hasn’t been determined legally. Asylum seekers must apply for protection in the country of destination—meaning they must arrive at or cross a border in order to apply.

Protection of refugees under law

The basic purpose of international refugee law is to provide, promote and extend protection to the refugees, people in refugee like situations and people outside the country of their origin or people who need it in case of displacement and migration. There is a need to consult International Human Rights Law along with other UN Conventions and treaties relevant to the refugee protection.

Camps for refugees and the internally displaced are meant to provide spaces of security for individuals and communities at their most vulnerable. Hence, there is a dire need to ensure their administration and management to prevent any internal aggression or conflicts. The UNHCR has formulated various coordination mechanisms for the same purpose.

International migration is a global phenomenon that is growing in complexity, scope and impact. Today, most countries are simultaneously countries of origin, destination and transit of migrants, so that countries in both less and more developed regions face various challenges and opportunities associated with migration. Since the International Conference on Population and Development (ICPD) in 1994, there has been a growing consensus that migration is an integral feature of global development in both sending and receiving countries.

Immigration policies generally respond to labour market needs and demographic objectives of destination countries. Governments implement immigration policies through laws, regulations and programme measures with the objective to manage the volume, origin, direction and composition of migration flows. In many countries, mostly in more developed regions, migration legislations have been characterized by regularization of flows and measures to better integrate immigrants in the host societies.